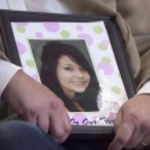 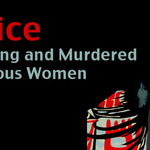 OTTAWA -- The troubled national inquiry into missing and murdered Indigenous women and girls is formally asking for another two years to finish its work, saying more time is needed to hear from the hundreds of people still waiting to share their stories.

The inquiry, which has a budget of nearly $54 million, was originally scheduled to wrap up by the end of 2018, but chief commissioner Marion Buller has long warned more time and money will be necessary.

"The commissioners and I firmly believe that an additional two years is required to do justice to our critically important mandate for the safety and security of Indigenous women, girls and 2SLGBTQ (LGBTQ and two-spirit) people," Buller said in a statement Tuesday.

A photo of Hilary Bonnell is seen as Pam Fillier and her husband Fred Fillier appear at the National Inquiry into Missing and Murdered Indigenous Women and Girls in Moncton, N.B. on Tuesday, Feb. 13, 2018. THE CANADIAN PRESS/Andrew Vaughan

"The response from families, survivors and Indigenous communities has been overwhelming and we have a sacred responsibility to them to continue moving forward."

The office of Indigenous Relations Minister Carolyn Bennett confirmed it had received the inquiry's request and that the minister would speak over the coming weeks with families, Indigenous partners, provincial and territorial officials and her cabinet colleagues about the possibility of an extension.

"The families of these women and girls need answers to the systemic and institutional failures that led to the murder of so many Indigenous women," Bennett said in a statement.

"We are committed to getting them the concrete recommendations they have been waiting for and putting an end to this ongoing tragedy."

The inquiry's mandate is the result of action not only from the federal government but also the provinces and territories, meaning an extension would require agreement from multiple jurisdictions.

An additional two years would extend the inquiry's mandate to the end of 2020.

Ottawa established the panel in late 2015 to examine the evidence behind a disproportionately high number of missing and murdered Indigenous women and girls and to give family members a chance to have their stories heard.

But the start date was pushed back by eight months, which the inquiry blamed on the federal bureaucracy in an interim report released last November.

The request for an extension follows a period of criticism and unrest within the organization dating back to last year, which saw the unexplained departures of a commissioner and several of the inquiry's directors. Families and survivors have also vented frustration at lengthy delays and a lack of communication.

At one point, a prominent First Nations chief in Manitoba called for Buller to step aside.

The commission has so far heard from more than 760 witnesses during nearly 250 public, in-camera and community hearings across the country. About 630 more have registered to participate.