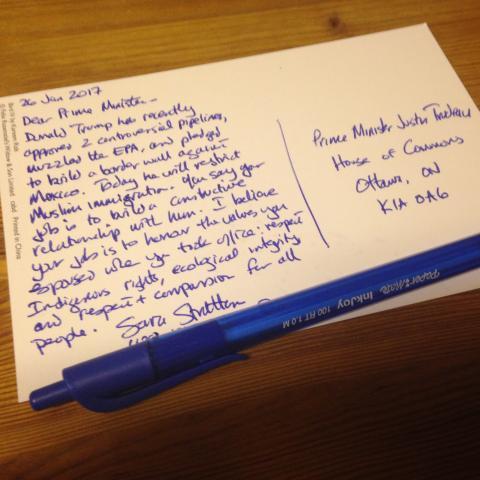 “It is urgent that all people of faith and goodwill unite and muster our collective spiritual resources to resist the growing fear and division that are spreading among us,” Moderator Jordan Cantwell recently noted. She calls us to stand together to protect the vulnerable and challenge hate wherever we encounter it—including in ourselves.

Recent actions taken by President Donald Trump have raised concerns that such values are under threat, specifically Indigenous rights, climate change, and refugee rights. Prime Minister Justin Trudeau cited these as crucial values after he was elected, and pledged that they would be priorities of his government.

Moderator Cantwell urges the church to respond in love to any actions from political leadership that threaten those values: “Yes, we will forcefully resist any efforts to strip people of their dignity and rights—but the force we will use is love.”

Prime Minister Justin Trudeau has said, “It is the job of the Canadian prime minister to have a constructive working relationship with the President of the United States.” Join the postcard campaign urging Prime Minister Trudeau to communicate to President Trump that Canadians are concerned about Indigenous rights, climate justice, refugee rights, and the dignity of peoples of all faiths.

Ask that the Prime Minister recommit to acting on these values in Canada’s own policies. On a personal level, make a commitment to learn more about and dismantle the racism and Islamophobia that are an integral part of the current context.

For action, go to the United Church of Canada website